For Djab Wurrung trees and country 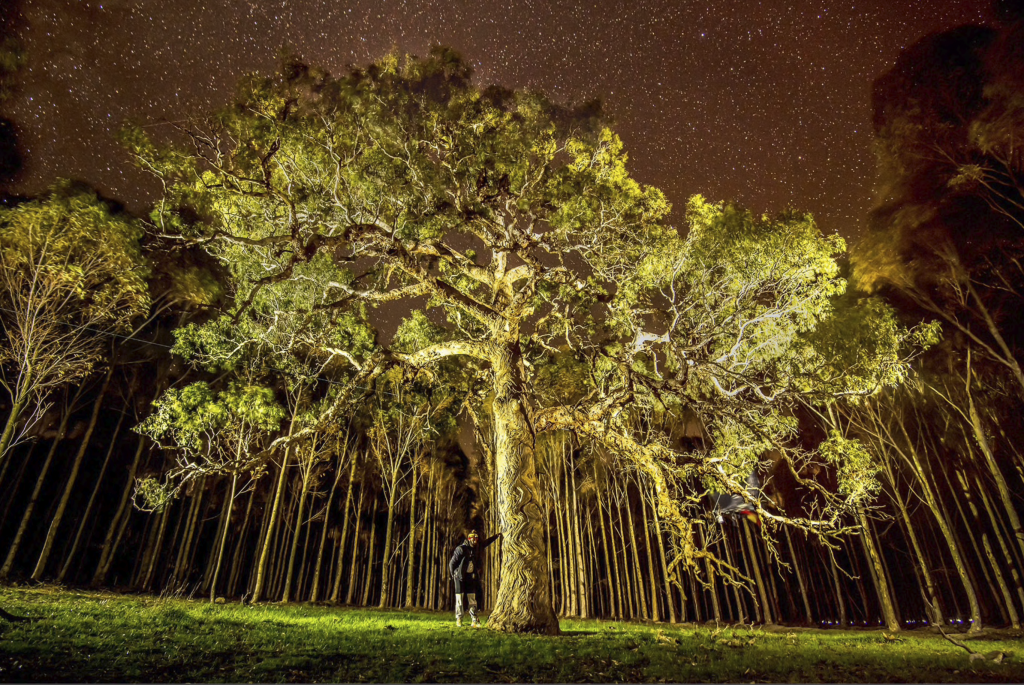 In late October, as Melbournians were celebrating liberation from three months of pandemic lockdown, the Victorian government authorised contractors to move in and cut down a large fiddleback tree on Djab Wurrung country near Buangor, south of Ararat. This tree is one of a community of majestic, socially and culturally significant trees on a stretch of land put at risk by the state-government project to upgrade twelve kilometres of the Western Highway, the main route between Melbourne and Adelaide. These trees and their surrounding country have been tirelessly watched over by Djab Wurrung owners and custodians and their supporters at the Djab Wurrung Heritage Protection Embassy since June 2018. The felling and removal of the fiddleback, which Djab Wurrung identify as an ancestral ‘directions tree’, was met with an explosion of shock, distress and outrage that has echoed around Australia and internationally.

The processes of consultation and contestation over this highway upgrade are long and complex. In an echo of Rio Tinto’s deliberate blasting of the 46,000-year-old site at Juukan Gorge, they expose deep and disturbing fault lines in contemporary settler-colonial governments’ dealings with Indigenous people. The report of the Victorian Ombudsman’s investigation into the planning and delivery of the highway provides a remarkably sensitive and detailed history that should be required reading for all Victorians. Significantly, the report commences not with the road project per se but with the decades-long process of invasion, dispossession and murder that commenced in the 1830s, culminating in ‘near ethnocide’ of the Djab Wurrung by the 1870s.

The clearing of country to lay the road that would become the Western Highway was integral to the devastation of that community. Like so many major arterial roads around the continent, this road was carved along what was likely to have been a major trade route for Aboriginal people of the region. Settlers seized Djab Wurrung country because it was abundant in resources, with plenty of water, rich volcanic earth, and diverse plant and animal species. The custodians of that country fought back vigorously as they were murdered, massacred and removed by other means in waves of violent dispossession.

The road project has painfully exposed, yet again, the structural violence that comes into play everywhere that the mutually exclusive logics of state development and Aboriginal country meet. The Aboriginal Heritage Act 2006 (Vic) that guides negotiations over the road is the same legislation under which Registered Aboriginal Parties are established as the authorised bodies to represent traditional-owner interests. In nearly all cases where states require associations of traditional connection to be publicly performed in order to be recognised, the persons called upon and authorised to perform them have had their associations fractured by colonial dispossession. It is a cunning act of the state that ensures that Aboriginal owners and custodians who refuse to participate on these terms will not be recognised and are often excluded from formal processes of consultation.

One of the forms of violence that circulates in development contests operates through the very concept of traditionality. Aboriginal traditional ‘heritage’ is established through the prism of archaeology. It turns upon certain technologies of survey and evidence, historical records, carbon dating and the like—not oral history or closely guarded intergenerational storytelling—to attest to continuing association between a community of people and their country. Heritage assessments tend to identify particular localised sites and numbers of objects, trees and landscape features as significant, not more diffusely situated and integrated landscapes, ecologies and regions threaded through with cosmological meaning. So it is that the Victorian government can show itself to have been sympathetic to Djab Wurrung concerns by rerouting the highway to protect sixteen out of twenty-two trees. To this way of thinking, numbers matter. Yet, from an Aboriginal perspective, as Ngairgu professor of linguistics Jaky Troy recently observed, such a way of dealing with cultural heritage puts Aboriginal people in a position of effectively having to ‘decide which child to kill’.

Relatedly, these processes have appalling ricochet effects through extended Aboriginal communities, turning against each other those people who wish to negotiate with the state and those who do not, wreaking destruction akin to a further wave of colonial dispossession.

While rarely countenanced, there are always alternatives to the insidious recognition regimes that require Aboriginal people to perform their traditionality for their colonisers and enter into trade-offs over projects deemed to be in the national interest. In the state of Victoria, with a government not only keen to show itself as sympathetic to Aboriginal interests but also intent on negotiating a treaty, a very different and transformative approach to resolving disputes such as this one would seem to be vital.

In the case of Djab Wurrung country, there is an obvious, perhaps naive, definitely pragmatic and very straightforward alternative: don’t upgrade the road, just slow the traffic down. And in the act of slowing traffic down—just imagine it, on a highway!—we might spark a vision for a different Australia in which slowing down gives rise to contemplation of what it means to pass through Djab Wurrung country, once violently dispossessed and ‘civilised’, then rendered invisible, but now subject to new shared reverence and protection.

In the meantime, Aboriginal landowners in many parts of Australia remain caught in an impossible double bind. As Djab Wurrung/Gunditjmara woman Sissy Austin put it in announcing that she would resign from the First Peoples’ Assembly of Victoria, ‘There is this indescribable feeling that comes with attempting to seek justice and empathy from the very same system that was built to destroy. Destroy it did, and destroying it continues to do’.

Destruction and erasure: Juukan Gorge and the contemporary settler-colonial imagination

Melinda Hinkson is an anthropologist based at Deakin University. She is director of the Institute of Postcolonial Studies, and an Arena Publications editor.