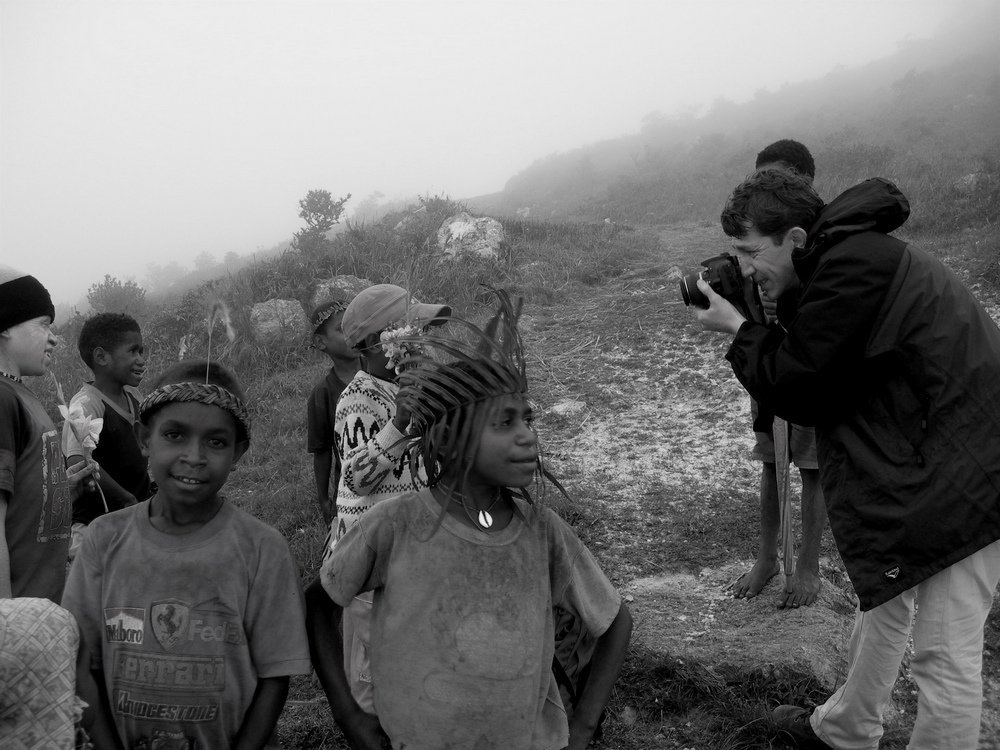 Three little boys hug each other tight as the waves crash over them, threatening to swamp their wooden canoe. This is Torres Strait, to the north of Australia, and the Roem brothers have been sent away across the ocean by their mother and father because they fear for their children’s lives.

In a few moments, two of those little boys—Yoshi and Sammy Roem, now famed drummers, singers and dancers—will take to the stage under the bright lights of Adelaide’s world music festival, WOMAD. Backstage, Yoshi tells me,‘We got lost on the sea for five days…there was a reason for that journey—so we could be here today, just carrying the voice of freedom, carrying the voice of free West Papua’.

In 2006, Yoshi and Sammy were political refugees, chased by the Indonesian army and navy until they washed up on Cape York. Today they are Australian citizens and cultural warriors for the friends and family they left behind in Indonesia’s eastern province of West Papua. Tonight, in Adelaide, the impact on the audience is clear as Yoshi drums his way onto the main stage, traditional tifa drum in hand, to join the ten-piece electro-trad drum-and-dance fusion extravaganza Sorong Samarai.

WOMAD is one of the great world-music festivals, loved and applauded by artists, music lovers and festival connoisseurs. This year WOMAD is thirty years old, and it has never looked better. There’s a beautiful arboretum garden, shady and pleasant, even under the sting of the hot South Australian sun. There’s world food, and great South Australian vino and cold beer aplenty, in what must be the greatest musical beer-garden in the world.

Yoshi muses, ‘This band, the Sorong Samarai band, we say, “music is our weapon of choice”. We tackle the issue of West Papua through dance and music and songline. Just putting the flag on stage, just holding this flag, is a huge privilege. Back home it is forbidden, many people die for this flag’. As Australia and the world focus on the Russian invasion of Ukraine, noisily demanding justice for an innocent civilian population, the invaded and brutalised farmers and families of Australia’s neighbour West Papua go unseen and ignored.

Unlike many of the other inspiring acts on WOMAD’s many stages, Sorong Samarai tells a clear political story—a narrative of neocolonial genocide and ecocide in their homeland. In Papua they say that ‘all men are birds’, meaning that everybody sings and is close to nature, embedded in the forests, mountains and ocean, and carrying the stories of earth, creation and bio-interdependency in their singing. This connection to nature, place and history is evident as the Sorong Samarai crew carries the cultural torch for a legendary and loved West Papuan academic and musician, who no longer sings his gentle songs about land, language and the spirits of the rainforest because he was murdered by Indonesian special forces in November 1983, his body dumped in a forgotten jungle grave. Tonight, Yoshi and the band will channel the music and spirit of Arnold Ap, poet and martyr for the West Papuan people.

An anthropologist and musicologist at the Cendrawasih Museum, Ap travelled across West Papua recording the songs and languages of the 400-plus distinct language groups, and formed the legendary cultural revival band Mambesak. Mambesak’s songs exalted the beauty of local life and land, and became wildly popular as songs of resistance. They meme-ed their way across the Indonesian archipelago, syncing with human rights struggles in South Maluku, Borneo, Aceh and even Java, where anti-Suharto activists added them to the canon of protest against the corrupt kleptocracy of President Suharto and his brutal military.

Yoshi knows many of Ap’s protest songs by heart. He and his brothers grew up singing them in Wamena, the capital of the beautiful Baliem Valley in the West Papuan highlands. ‘Arnold Ap, he’s a legend, he sung songlines in our languages. As a young West Papuan I see him as an example. In Jayapura [capital of West Papua] the local hip-hop musos like and sample Arnold Ap. Like him, they use local language to sing’.

Under strobing lights and smoke, Sorong Samarai is in a frenzy. Yoshi and Sammy dance in tandem, centre stage, combining chic Melbourne hip-hop moves with Papuan tribal dance. Log drums roll frenetic rhythms in an ecstatic climax and the crowd roars in appreciation. In the breath between songs, two women wrapped in West Papuan flags join the band on stage and burst into song: Petra and Rosa Rumwaropen, who with their sister Lea make up singing trio The Black Sistaz. Petra recalls, ‘I was born into the political movement through music, because my father was a member of the Black Brothers. Growing up we were taught to keep the culture alive through their music. Like Arnold Ap, carrying on the same message and struggle’.She continues:

Petra’s father, Agust Rumwaropen, was a founding member of the Black Brothers. The rock-reggae-funk-trad fusion band formed in Jayapura in 1974 in reaction to the Indonesian invasion of Dutch Nui Guinea in 1963 and the bogus UN-supervised referendum on Papuan independence in 1969, in which 1025 West Papuans were hand-picked and, under military supervision, forced to vote to join the Republic of Indonesia. Exiled West Papuan elder and leader Jacob Rumbiak says, ‘The 1025 were locked up by the Indonesian military and told to vote for Indonesia or their accursed tongues would be cut from their accursed mouths’. TheBlack Brothers would not be silenced, and went on to inspire generations of musicians and political resistance in West Papua and across Melanesia, in Papua New Guinea, Vanuatu and the Solomon Islands.

Airileke Ingram, the leader of Sorong Samarai, counts the band in, and ten drummers fly into a cataclysm of pounding beats. The band’s co-founder Ronny Kareni thumps out a fat funk base line on electric bass. Screaming electric guitar joins the rising rhythm, sending the WOMAD audience into a pogoing dance delirium.

Ronny says, ‘Sorong Samarai is a band but it’s also become a movement in itself, where the simple words, Sorong (western tip of island of Papua) and Samarai (eastern tip), have become everyday language to symbolise the struggle of the people of West Papua’. One thing the Black Brothers, Mambesak and Sorong Samarai have in common is that their music is a conduit to convey the basic human right of freedom of cultural and political expression. ‘Like these music legends, we sing about the memory of suffering as a healing process in our collective movement, we sing about truth and justice in our land, and to remind ourselves and the world that full freedom for West Papua is possible’.

Music is irresistible. Arnold Ap’s weekly radio show in Jayapura spread the idea of music as a counter-force to neocolonialism, military occupation and cultural destruction. The rising popularity of his music saw Ap arrested and imprisoned. Kopassus special forces—Indonesian military trained by Australia—tortured, starved and beat him in his Jayapura prison cell. Fearing for his life, Ap gained access to an old reel-to-reel tape recorder and a guitar, and alone in his cell, only days before his death, wrote a love note to his wife and recorded his last song, ‘The Mystery of Life’, a gentle song praising life, love and land. The note and tape were smuggled out of prison and across the border into Papua New Guinea, where Ap’s wife and children had fled as political refugees.

Yale University suggests that since Indonesia first invaded West Papua in the early 1960s, 400,000 men, women and children have been killed, echoing the better-known killing fields of Indonesia’s brutal occupation of East Timor. With only two thirds of its operating budget supplied by Jakarta, the Indonesian military must fund its activities via an opaque mix of legal and illegal businesses. In West Papua, far from the prying eyes and bleeding hearts of modern Jakarta, it has found an Eldorado of gold, oil and timber.

Ronny Kareni says that tens of thousands of Indonesian soldiers now occupy West Papua. No one knows the true figure. The Indonesian army, partially trained and armed by the United States and Australia, has a documented history of mass rape, torture and murder. Since 2017, it has been involved in ‘sweeping operations’, occupying villages, machine-gunning settlements from helicopters, actions that have sent tens of thousands of refugees fleeing into the forest, some into neighbouring Papua New Guinea. Today there are as many as 60,000 to 100,000 internally displaced people, while, under military protection and coordination, thousands of kilometres of virgin rainforest are being cut down and sold off, assisting in the systematic destruction of the third greatest forest on earth.

Cymbals shimmer and crash; the drums crescendo and fall silent. The stage is dark, the gig is over, the breathless WOMAD audience is blown away by the life-force of the Papuan drums and voices.

Backstage, in the artists’ garden, theSorong Samarai players rest, recoup and reflect. Yoshi says, ‘I was looking at social media and seeing people posting their voice about Ukraine. And that’s cool, okay, I pray for them, but it makes me feel little. It makes us feel down, to be honest, little, like we’re no one, just because we’re black, because we’re not white skin and blue eyes, being West Papuan.  But we’re human too’.

Petra joins in, ‘Just this week there were student protests where peaceful protesters were injured, shot and arrested. It’s an ongoing situation. We call it a slow genocide. Every day, especially in the highlands, where it’s remote, people are being attacked, villages are being bombed. West Papua is Australia’s closet neighbour, and there’s no media coverage of what’s been happening there’. She continues, ‘My one message to the Australian prime minister would be, “Stop turning a blind eye to your brother, to your neighbour, we’re only 250km away from you, we’re on your doorstop, people are dying, you need to step up and do something”’. Ronny smiles as he eats a salad and smashes a two-litre bottle of water. ‘We call on the Australian government to be vocal on human rights in West Papua just as they have been for Ukraine. The leaders of the Pacific Islands Forum, which Australia is a member of, have agreed to call for a visit of the UN Human Rights Commissioner to West Papua to carry out an impartial investigation. This is what Austra

WE ARE NOT MONKEYS!, BY PETER ARNDT

As Indonesian brutality intensifies, the Papuan struggle for independence reaches a crisis

Charlie Hill-Smith is the writer-director of the multi-award-winning documentary Strange Birds in Paradise: A West Papuan Story