Experiencing the Floods: Counting the Costs, Preparing for a Hostile Climate 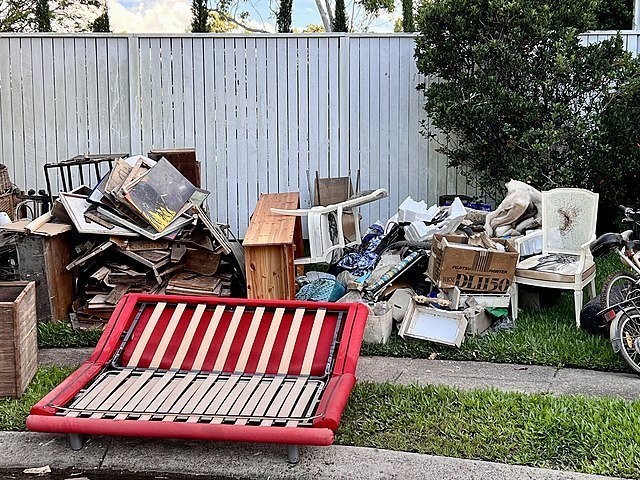 I recently caught up for lunch with my friend Emma, who I first met at the dog park about eighteen months ago. It had been two months since the east coast floods hit Brisbane and we became impromptu housemates for a week. It will probably be another two months before Emma can move back into her home.

In these megafloods of early 2022, Emma’s was one of around 20,000 homes in Brisbane that flooded. Northern New South Wales also copped a walloping, most notably Lismore, which lost around 3000 homes and its town centre. Without enough professional or volunteer SES emergency responders on hand, neighbours were left to perform lifesaving rescues from roofs and roof spaces, where people had desperately sought refuge from rapidly rising water.

This was the second flood in just a matter of weeks for Lismore, and one which eclipsed all previous flood levels and forecasts. Twenty-two people died in the event across Queensland and New South Wales. The increasing geographic scale of climate catastrophes doesn’t respect borders, and their increasing frequency doesn’t respect the fact that people need time to recover, physically and emotionally.

On Saturday 26 February, after days and days of relentless rain, I went for a walk around my neighbourhood, heading down the hill towards the park and the creek. People had put out wheelie bins to block flooded roads, and I could see that Emma’s street was underwater. I gave her a call from the corner, as close as I could get, to see if she needed anything. She said, ‘Nah, all good, we’ll be right, we didn’t flood in 2011’.

On Sunday morning the sky was again dark, the ground was saturated, and the news sites were telling us more rain was on the way and that today could be even worse than all the awful days before. Things felt ominous. Everyone I spoke to was so over it. Much like the ground around us, we felt soaked to our core. I’d sent my family in Canberra a video of the rain with the useless plea, ‘Please make it stop’. I’d been checking all the drains around my house several times each day, putting on wellies and a heavy rain jacket and still getting soaked every time, sinking and squelching as I trudged through my yard. I tried to find emergency warnings on the radio, but the service was down. When it came back up later, the rain was so heavy I couldn’t have heard any warnings anyway.

With it still raining heavily, later that morning the Bureau of Meteorology tweeted a warning of two dangerous storms converging on Brisbane. It felt surreal, utterly impossible that the sky could still hold any more water after everything that had already been dumped on Brisbane. But sure enough, the extremely heavy rain got heavier, like a city-sized bucket was being upturned. And then water started gushing through my walls.

My kind neighbours Ben and Amy had just spent three hours helping me and my younger child bail water from my bedroom when I got the call from Emma: ‘Hey, you know how you said call you if I needed anything? Well have you got room in your place for me, my dog and my [adult] son? We have to get out, now’.

There was no other answer than ‘Of course’.

Ben is a journalist and headed out to take photos down the hill, so he also checked up on Emma to make sure she could leave safely. Luckily there’s two-sided street access to Emma’s place, and Emma, her son and her dog were able to leave from the slightly higher ground out the back.

They made it to my place, and Emma’s son carried her and some hurriedly packed bags up the front stairs in the still-pouring rain. My child had already pulled out the spare mattress and made up a floor bed and the couch, so my lounge room was ready to receive our guests, looking as cosy and inviting as possible. Lovely dog Kimba politely introduced herself to my cats and settled in.

Emma, her son and the dog ended up staying a week. Each day her son headed out to clean up her home, and along with several of his mates they started the long, sad process of removing damaged items and placing them out on the street for pick-up. My job was to take Kimba for afternoon walks, and as we plodded through the mud along so many streets just like Emma’s, at each house the same scene was playing out: tired-looking people, usually several of them, adding more and more stuff to a big, dirty, misshapen pile out the front. Fridges and furniture and countless unknown treasures. This went on for days, the piles morphing and spreading. I would walk past quickly with Kimba, trying not to gawp at people’s grief piled up in the street, grateful I had merely lost a room.

During that week we felt the best of community. One of Emma’s friends dropped delicious food over and neighbours took Kimba out for 5am walks. Meanwhile Emma carried the heavy emotional load of learning what had been lost from her home, what was and wasn’t potentially salvageable, and the uncertainty about when she might possibly move back in. There was also the struggle to find appropriate temporary accommodation—somewhere local, to keep an eye on building repairs to her home, and somewhere that was both wheelchair accessible and dog-friendly.

Emma has been living with Kimba in temporary accommodation ever since, while her son is now staying at her house, with electricity back on one floor, in an effort to protect against looting. She’s more car-reliant than she was before, as her wheelchair motor was lost in the floods and there’s no way to move around the steep hills of Brisbane’s inner north in a chair without some extra assistance. This disrupts routines, limits physical activity through active transport and reduces daily opportunities for incidental social interactions.

My own bedroom was uninhabitable from flooding, and I slept on the fold-out couch in my study for five weeks, which is how long it took me to properly clean up and get a building assessment done (at the time of writing I still haven’t seen the report, and whatever work needs doing will have to wait too, as there is a very long list of more urgent jobs ahead of mine). I ran a borrowed dehumidifier for weeks. The extent of the mould was incredible, infecting most of the house. It took me more than two full days and a few trips to Bunnings to remove it.

Now the news has moved on. An election date was declared and that filled the parts of the news cycle that weren’t taken up by the invasion of Ukraine. During the election campaign we heard barely a murmur about climate change from either major party, even on the back of the compounding disasters of the last few years and despite voters nominating it as an issue of high importance. It seemed neither major party wanted to touch it with a ten-foot barge pole—something that might come in handy in future floods.

An analysis of Coalition and ALP policies by Climate Analytics shows that they both fail on climate action that is consistent with what science tells us we need to do, and that countries agreed to do at COP21 in Paris in 2015: keep warming well below 2C and preferably below 1.5C. ALP policies are closer to the mark, consistent with global average warming of around 2C, while the Coalition would have locked us into an unthinkable 3 or even 4C, by which time it really would be all over red rover. The ‘teal’ independents and the Greens both have policies that would keep us close to 1.5C.

Meanwhile, climate change is supercharging weather events in Australia and overseas. While it’s been cool and very wet on Australia’s east coast, India and Pakistan have been sweltering under early, extreme and ongoing heatwave conditions.

It’s relatively easy to put numbers against the immediate and direct impacts of acute catastrophic events such as the megafloods: 22 lives; 23,000 homes; 3.35 billion dollars in insured costs. We know too what the short-term health dangers are from flooding events: the proximate ones include drowning, of course, and injuries from sharp or hard objects in the water, and gastroenteritis and skin infections from contact with contaminated water. More difficult to measure are the respiratory and systemic effects of mould, and the short- and medium-term mental health impacts of traumatic stress.

Even harder to measure are the longer term and even more diffuse impacts.The grief of losing a loved one or the family home; the months—if not years, as it has been for some in the aftermath of Black Summer fires, for example—of living in temporary accommodation. The solastalgia from witnessing the destruction of beloved places. The increasing costs of insurance putting pressure on household budgets, or even the growing uninsurability that comes with companies realistically assessing the risks from climate change. It’s widely accepted by researchers in this space that the greatest public health costs of climate change are the ones that are most difficult to quantify: widespread displacement, forced migration, conflict over scarce resources, and violence against women.

Just because something is hard to measure doesn’t make it any less important.

What do we need to do?

We need to get better at analysing data and sharing information. We simply must get better at communicating risk so that communities have the best chance to prepare for the coming onslaughts—to make good decisions and take the best action they can, whether in fires or floods, heatwaves or severe storms. We also have to prepare communities and support them in the slow emergencies such as prolonged droughts, and adapt our cities and towns to a hotter, more hostile climate. We have to get better at managing emergency responses for those acute events. This means adequate resourcing of equipment and personnel, timely deployment, cooperation across jurisdictions and—given the growing geographic scale of these emergencies—national oversight and responsibility.

Above all, we have to reduce the risk of such catastrophic events occurring by slowing down the climate crisis and keeping average warming as near to the Paris-agreed threshold of 1.5C as possible. It’s clear that recent events fuelled by climate change, even at only 1.1C average global warming, have already exceeded our capacity to respond to them.

Today, there’s still nothing left of my local dog park. The flattened fences haven’t been rebuilt; the damaged gazebo is still covered in warning tape. The only thing that survived was the fresh concrete apron at the entrance that the council had installed just before the flood, at Emma’s request, to ease wheelchair access into the park. It now sits there looking ridiculously clean and neat in the otherwise chaotic surrounds, the soil surrounding it washed away to leave a small cliff for anyone venturing to use it. If Australia doesn’t step up its climate action to keep as near as possible to 1.5C then we risk toppling over a much larger cliff.

Hilary Bambrick is the Director of the National Centre for Epidemiology and Population Health at the Australian National University and a councillor with the Climate Council.