In Discussion: On the Humanitarian Consequences of the Syrian Conflict

You are invited to join a public discussion and conversation co-presented by the Australian Muslim Women’s Center for Human Rights and Arena Magazine:

Syria: A Nation Destroyed?
with
Zaki Mehchy and Maher Mughrabi
on the humanitarian consequences of the Syrian conflict

Since 2011, war has raged inside Syria creating one of the most devastating humanitarian disasters in modern history. An estimated half a million people have died, over eight million have been internally displaced and five million Syrian refugees have registered with the United Nations. All the indications are that the conflict will grind on indefinitely, with no resolution for the Syrian people. Zaki Mehchy, co-founder of Syrian Centre for Policy Research, will discuss, with Maher Mughrabi, how a country arrives at the brink of destruction and what might be the way to peace, stability and sovereignty.

Zaki Mehchy is a co-founder and researcher of the Syrian Centre for Policy Research (SCPR), which is an independent think tank established in Damascus in 2012. His work focuses on development policies and he has participated in various studies of the socio-economic impact of the crisis in Syria; poverty and multidimensional deprivation; social capital and social cohesion; labour force, demography, and community empowerment. He worked for the Syrian Centre for Development Research as a senior researcher before moving to SCPR in 2012. He has a B.A. in economics and a Diploma in International Economic Relations from Damascus University. He has MSc in International Economics from the University of Essex, UK.

Maher Mughrabi is Features Editor at The Age and was Foreign Editor for The Age and The Sydney Morning Herald from 2014 to 2017. He has previously worked at The Independent, The Scotsman, The Daily Mail and the Khaleej Times. In 2015, Arena Journal published his essay on the Arab Spring and its aftermath, entitled ‘Hunting Leviathan in the Middle East’. 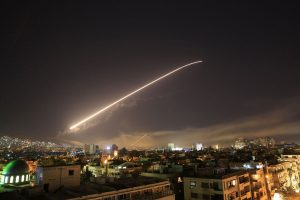