Dust in the Wind: The Transformation of University Culture 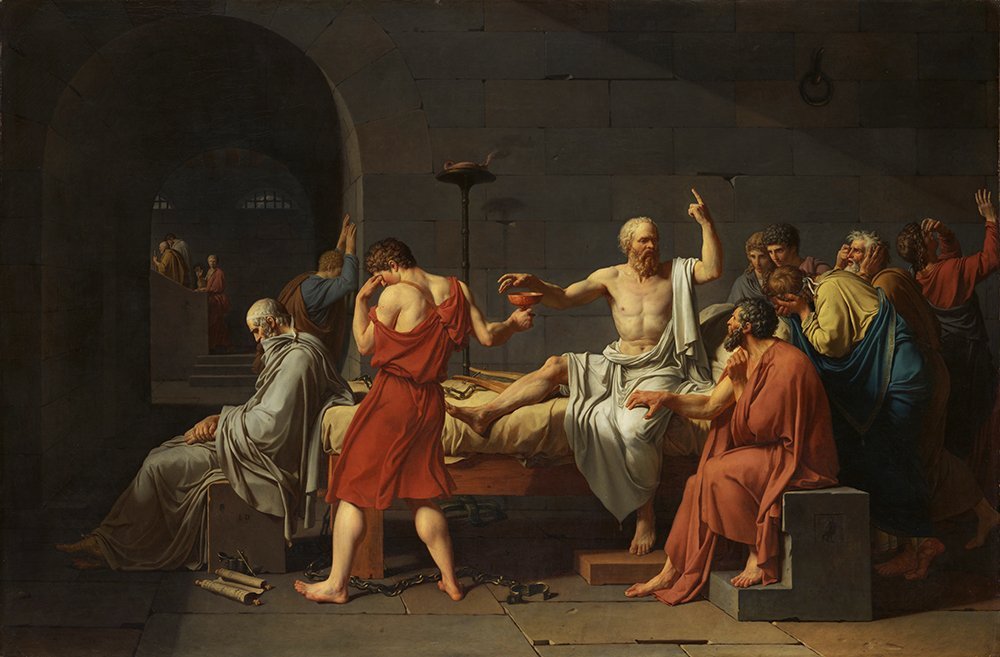 The Death of Socrates

How that time has fled,
vanished under the helm of night, as if it had never been.

Nearly forty years ago, in an undergraduate course on the history of the English language, I was introduced to Old English. My exposure to the peculiarities of early English phonology, vocabulary and grammar was a just brief flash, but it was enough. Our instructor recited the Lord’s Prayer in Old English, and the way those antique syllables joined sound with sense left me keen to know them better.

Our instructor kindly agreed to help me learn Old English properly, but later, when I announced my intention to pursue it further as a graduate subject, he was appalled by my folly. ‘A graceful way to starve’, he intoned sadly. ‘There’s no future in it.’ Events would justify his gloomy prognosis in the end, but what did I know then?

I set off with the blind courage of ignorance and, for a time, met with enough success in landing admissions offers, teaching assistantships, and fellowships to see me through a demanding course of further study. Seven years later I emerged, my shiny new PhD in hand and smiling at the memory of my instructor’s misgivings, into the world of professional scholarship à la 1990.

Decades later now, that world no longer exists. I jumped ship some years ago. The changes of weather and fortune that jarred my progress reflect, on a small scale, the larger upheavals that overtook tertiary institutions around the world during the same period. I hope a little summary of what I saw and experienced, at universities on three continents, might afford a more immediate perspective on the debates currently in play about the structure, funding and purpose of higher education.

My undergraduate career got off to a shaky start with failed stabs at studying first physics and then music. Third time lucky, however, when a BA in English literature fell within the ambit of both my desire and my abilities. That I could afford such impulse shopping should tell you something about the lie of the educational landscape in those just-post-baby-boomer years. University campuses were settling down after the cultural and political ballyhoos of the sixties and early seventies. Tuitions were shockingly cheap by today’s standards, and grants and scholarships sometimes went begging from year to year. High costs and the consequent indebtedness they impose now make such butterfly-flits from major to major impossible for most.

As a graduate student I got a closer glimpse of the metabolism of academia at a number of different institutions. What stands out now in retrospect suggests that my memory might be a little selective. Nowhere was perfect, but you often saw senior staff taking responsibility for introductory undergraduate units and performing their teaching duties with the same energy they brought to their research. Staff and students might socialise comfortably, and we shared a sense of participation in a common intellectual enterprise.

Were there authoritarian or time-serving lecturers? Cranky heads of departments? Student slackers? Of course, but these played their games against a broad backdrop of shared assumptions about education and learning as ends in themselves. The pursuit of learning, we imagined, was a self-evident good, whatever vocational prospects might blossom at the end of the process.

There were disquieting shadows. We all knew about the ‘publish or perish’ imperative that yoked the winged-horse élan of free inquiry to the farm-cart of mere opportunism. But as I took up what was to prove my quasi-career as a perennially part-time, short-term university lecturer, the cloud deck lowered and darkened. Funding streams for higher education, largely government-sourced, began to shrink like rivers in drought, as neoliberal ideologues slashed tax bases and forced many universities into business-governance models, touted for their greater ‘efficiency’. Dedicated administrators grew more numerous, on salaries that often rivalled those of full professors. Their policies reflected the demands of cash-flow management, and students became ‘consumers’ of institutional ‘product’. As universities competed to attract student dollars, advertising, once unheard of, consumed progressively larger proportions of stressed budgets. It also adopted the play of illusion and conditioned reflex practised by its forerunners in more commercial quarters, trafficking in fatuous slogans like ‘Dream Large’, ‘I Believe’, and ‘Worldly’ (huh?).

Administrators increasingly meddled in curriculum design and delivery, demanding ‘through-put’ of students in ever-greater numbers, with concomitant inflation of grades and dilution of standards. For the ‘fascist oiks in suits’ (as a feisty colleague called them in 1997), institutional command and control, with an increasingly heavy hand, was the only game worth the candle. They wielded the hammers, while growing numbers of the rest of us got to play the thankless part of nails.

Permanent, full-time academic positions dwindled to hens’-teeth scarcity, as the institutions’ product came to be delivered by increasing numbers of part-time staff on temporary contracts that anticipated the precarious condition of gig-economy workers for Uber, Foodora and Airtasker. ‘Tutorials’ that once involved no more than a dozen students swelled routinely to thirty or thirty-five, with a concomitant uptick in marking loads that has forced harried instructors to resort to inadequate assessment techniques such as multiple-choice quizzes for literature courses. The tyranny of metrics began to weigh on the relationship between teacher and student. Tutors are admonished to spend no more than ten minutes on any one piece of assessed work. Assigning a number grade to an essay on Chaucer or Emily Dickinson has always involved a degree of specious precision. But institutions anxious to deliver accountable transparency (to their managers as much as to their ‘consumers’) have further tangled that process in gridded or bullet-pointed screeds of ‘marking criteria’ that, like ‘key performance indicators’ in job reviews or ‘selection criteria’ in applications, foster a mirage of exactitude that disguises a tick-the-box culture of bureaucratic haste and indifference.

I did my best as a snapper-up of trifling contracts that generally demeaned whatever I could bring to the table as a teacher and scholar. In the end my patience snapped. The last advertised position I attempted to apply for required ‘the successful applicant’ to respond (‘in no more than six single-spaced pages’) to a manager’s wish-list of no fewer than twenty-five ‘selection criteria’. I assume these either reassured or pleased someone in HR, but by the time I got to number six, the overwhelming futility of what was clearly a mug’s game pole-axed my desire to persist.

Against the backdrop of the recent pandemic and the eerily correspondent inflammation of American electoral politics, such concerns as my little squawk here raises might appear small matters. But in higher education, as in politics, policy has come to be dominated by a crudely instrumental mindset. Inherently messy human realities must speak a language of quantity rather than nuanced quality. Reduced to numerical scales, the large, unstable ambiguities of educational transactions yield to a mirage of manageable piece-work. Tidy, perhaps, but haunted by larger questions about our culture’s real values, and how resilient those values might prove against the militant ignorance of ill-informed internet yahoo-ism that presses on the shrinking fences of civil discourse from every quarter. There are no easy answers, but the questions lie thick on the ground. Those I have raised here are only a few.