Brave New Wild: Why ‘Resurrecting’ the Thylacine is a Dangerous Idea 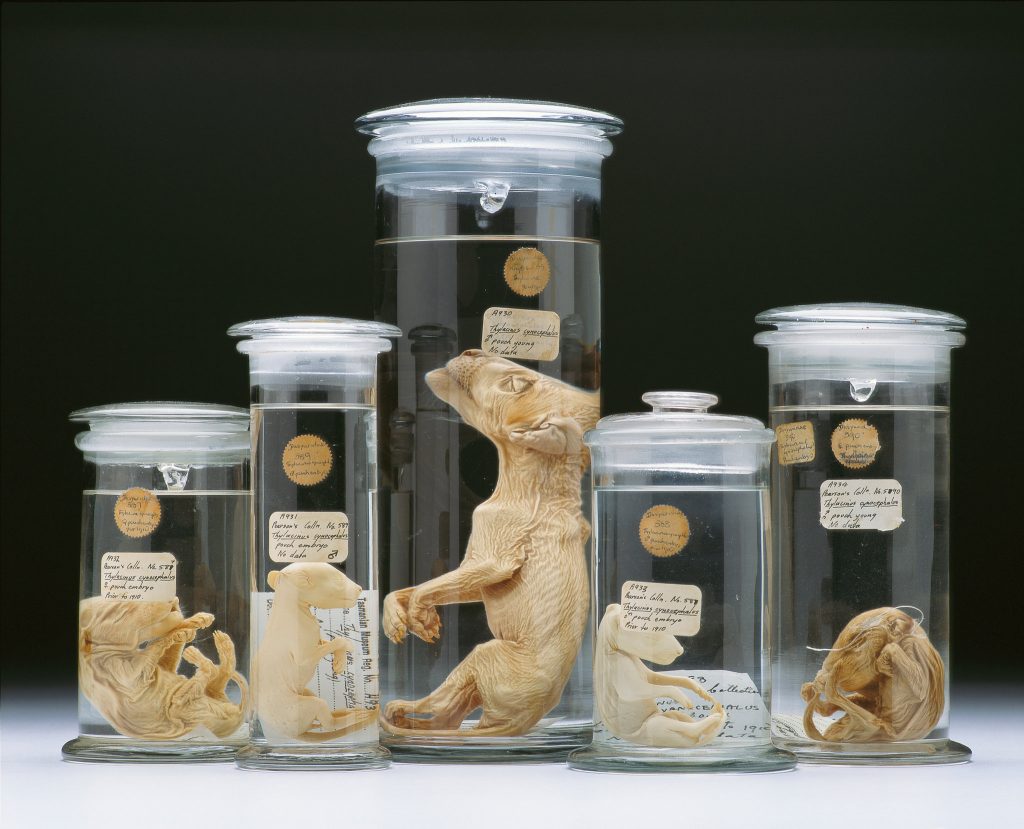 In 2021 the National Film and Sound Archive released new footage of the last known thylacine, or Tasmanian tiger. Where previous footage had been in black and white and set to a Pathé-newsreel-style voiceover, the new film was entirely silent, and had been digitally enhanced and recoloured by technicians working from sketches, paintings and thylacine pelts held in museum collections. Thus restored, the images were strangely haunting: the doglike marsupial, hunted to extinction in the early twentieth century, seemed for a moment uncannily ‘present’ and the tragedy of its loss a little keener for the apparition. As ‘Benjamin’ prowled around his ratty pen, pausing only to scratch himself or take in a smell from the surrounding bush, one felt sad, as opposed to merely angry, about the fate of this iconic beast, and about the wider ‘Anthropogenic’ calamity of which its disappearance is one tiny part.

Now, however, a Texas-based company hopes to accomplish a restoration of a categorically different order, and to cast humankind in the role of hero, or at least of newly humbled species doing its best to make amends. Founded by the renowned geneticist George Church and serial tech entrepreneur Ben Lamm, Colossal Biosciences (yes, it’s true, everything is bigger in Texas) specialises in ‘de-extinction’, which is to say the still hypothetical process of resurrecting extinct animal species through cloning, genetic engineering and selective breeding. To date, its most eye-catching campaign by far has focused on the woolly mammoth, which it hopes to bring back into existence by adding genes for cold resistance and thick red hair to Asian elephants before reintroducing it to the Arctic tundra. It was its work on the Tasmanian tiger, however, that made headlines in August 2022, when the University of Melbourne’s TIGRR lab (Thylacine Integrated Genetic Restoration Research) announced not only that it had teamed up with Colossal but also that it was very close to sequencing the thylacine genome. The next step will be to compare the genome of the thylacine to that of a close living relative, such as the fat-tailed dunnart or numbat, and then re-engineer the latter’s genome to more closely resemble the former’s. Andrew Pask, team-leader at the TIGRR lab, predicts that ‘a de-extincted thylacine-ish thing’ will be with us in around a decade.

Opinion is split within the scientific community about the desirability of pursuing such a course. Supporters of resurrecting the thylacine suggest that its reintroduction to Tasmania could help balance that state’s remaining forests by picking off weak and sickly animals and controlling overabundant herbivores such as wallabies and kangaroos, while objectors question the wisdom of funding high-profile de-extinction projects when countless other animals, including some marsupials, are currently on the verge of extinction. Almost invariably, the debate is framed in practical rather than philosophical terms, as a disagreement about means rather than ends, with little if any attention paid to how certain means transform certain ends. Where questions of morality do emerge they will tend to focus on animal welfare rather than on the broader question of whether human beings should be ‘rewriting’ nature at the genetic and molecular level at all, and whether there is an in-principle difference between a science that pursues such interventions and one that stresses conservation and habitat management through more traditional mechanisms.

That those broader questions remain largely unaddressed is due in part to the world-picture that attends the technosciences. This picture is one in which scientific and technological innovation is held to be both the driver of progress and the telos (goal) of humankind—a Big History view of human development that sets technological transformations, however revolutionary, in a narrative of exponential advance. The narrative can be seen at work in the reaction to new genetic editing technologies, which are celebrated both for their revolutionary potential and deemed no different in principle to the selective-breeding practices of the past. Thus human ‘nature’ is linked to nature’s transcendence in a way that leads in the most extreme cases to Ray Kurzweil-style transhumanism: i.e. the idea that it is in our stars to decisively outsoar our physical form, becoming one with smart machines. Of course, this technoscientific world-picture has plenty of space for environmental concern; but what it cannot do is think ‘around’ its own assumptions to forms of social and political ‘innovation’ that do not depend on the transformation of nature, or begin to appreciate how those assumptions—and the actions taken under their influence—transform humanity’s relationship to nature in ways that may be storing up even bigger trouble in the future.

Underpinning this ‘progress’ narrative is the character of the technosciences themselves. As many Arena editors and regular contributors have argued over the years, ‘technoscience’ describes a reasonably novel ensemble of social and ideological forces in which science is subordinated to technology—i.e. to practical utility—and technology is subordinated to social and economic power, especially (though not inevitably) liberal capitalism. This ensemble of forces requires a tightly woven ‘ecosystem’ of institutions, from school syllabi and the modern university (now denuded of its humanistic ethos) to corporations and political patronage. It also makes its own ideological weather, spreading its priorities far and wide, and shaping even the systems of oversight charged with keeping an eye on developments. Thus, while Pask insists that his team will consult the public before proceeding to de-extinct the thylacine, the debate will almost certainly be limited to questions of safety or practicality, before devolving into a sub-Galilean stoush between Science on the one hand and Religion on the other, with the latter’s accusations of ‘playing God’ condescended to and then studiously ignored. As with stem-cell research and the recent Mito Bill, very little airtime will be given to social and humanistic critique, not because of some media conspiracy but simply because we lack the terms in which to make such arguments (those that doubt this last assertion should check out First Dog on the Moon’s recent run-in with the ‘perky boffins’ in the Guardian.)

What, then, would such a critique consist of? For Arena and its periphery, it would begin from the observation that technoscience is not continuous with humanity’s development in the way that the progress narrative imagines, but that it represents a radical break—long in the making and of complex provenance—with previous understandings of nature, and a new sense of power and possibility with regard to its ‘fundamental’ elements: that we are moving from a view of nature as something to be channelled or tamed to something that can be actively reconstituted at the level of the gene, the molecule and the atom. It would point out, too, the thoroughgoing ‘reversal’ this situation brings into prospect, as nature, and human beings themselves, can be redesigned to suit the reality in which we currently find ourselves—a state of affairs that would be scary enough if it only applied to genetic technologies and mind/mood-altering pharmaceuticals but could easily prove calamitous in the event that ‘the world’ (i.e. the US or China) decides to re-engineer the environment through solar radiation management or some other radical intervention in an attempt to reverse or arrest global heating. If the prospect of a ‘de-extincted thylacine-ish thing’ induces a certain ‘yuk’ response—one often dismissed as mere superstition by the avatars of technoscience—it is to this hubristic, Promethean mindset that we are, I would argue, often reacting.

It follows that any public debate on de-extinction technologies must take account of the broader processes that are bringing such affordances into being, and the long-term social and psychological effects of regarding the latter as self-evident progress. This is not a scientific question, or even just an ‘environmental’ one. It is a question about our place in nature, about the kinds of creatures humans are, and about the moral and ethical ‘ecosystem’ in which future generations will find themselves. My feeling is that if we continue to regard the physical world, and all physical beings, as so much stuff to be manipulated, we could land ourselves in a situation at least as bleak as Benjamin’s: alone in a featureless pen of our own making, increasingly uncanny to ourselves and to one another.

The transition to the posthuman will not turn on any Judgment Day scenario, but will be a slow and incremental process of quantity turning into quality.

Richard King is a writer based in Fremantle. His new book, Here Be Monsters: Technology, Capitalism and Human Nature, will be published in 2023.

What a load of biased science fearing crap! The absolute WORST thing that could happen from bringing an animal back is that it doesn’t work. That is the worst thing that could happen. Thylacine =/= tyrannosaurus rex. This is not jurassic park. This animal would still be around right now if they had not shot every last one. This is NOT incompatible with conservation- they are two separate scientific fields. Doing one does not mean that you also cannot do the other. If anything this will add another tool t9 conservation.