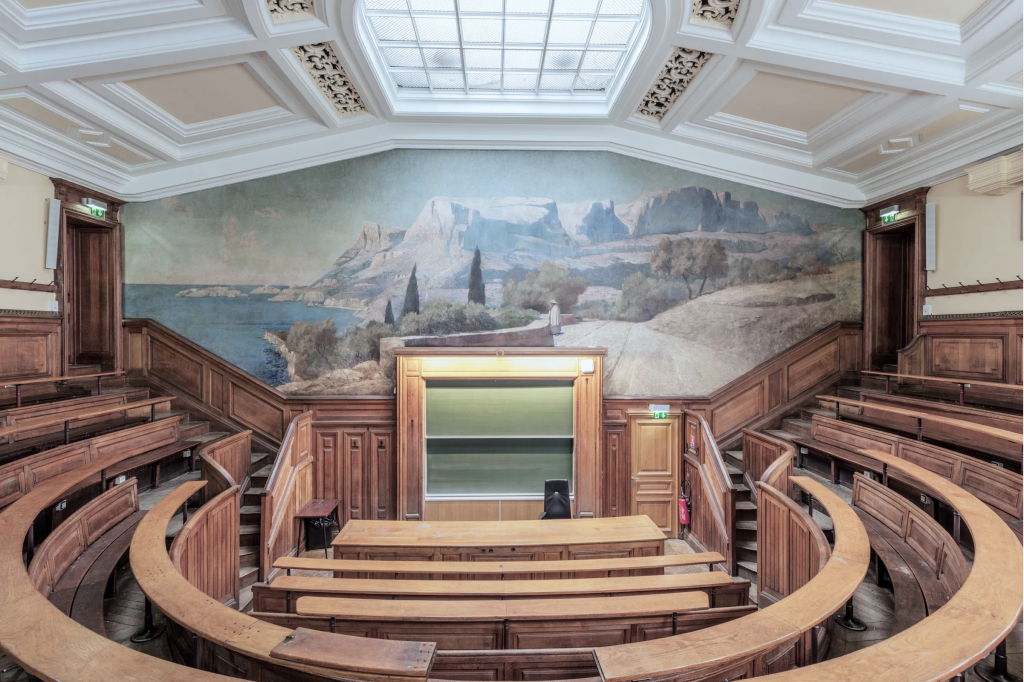 Anyone teaching or researching racism, colonialism or Islamophobia will be accused of ‘Islamo-leftism’

It was not enough for the Macron government to prevent any discussion of ‘state racism’ by issuing a controversial imam charter that equates the denunciation of the state’s racist acts and policies with ‘defamation’, which ‘exacerbates both anti-Muslim and anti-France hatred’ (Article 9 of the charter). Now, it looks like the French government envisages issuing a good academics charter. The good academic is defined as a disciplined teacher who, according to the French minister of higher education, Frédérique Vidal, separates their lectures, tutorials and research from what she sees as their ‘opinion’ or ‘activism’. In fact, this control-and-punish approach creates an Orwellian educational system where Big Brother robs researchers of their autonomy. This dictatorial surveillance of academics clashes with the values of the Republic and with the values of the Enlightenment, which opponents of so-called ‘Islamo-leftism’ pretend to ‘protect’.

But what is the reason for all of this? What led Emmanuel Macron, who presented himself as ‘neither left, nor right’ during the last elections, to adopt this right-wing stance and discourse? The 2018 gilets-jaunes protest movement led to a huge decrease in Macron’s popularity. The next presidential elections are scheduled for April 2022. Therefore, in recent months Macron has been determined to prove that his government is cracking down on Islamist extremism. However, many argue that his strategy to win electoral votes has turned out to be an anti-Muslim campaign that heightens Islamophobia. A cornerstone of this Islamophobic campaign is the problematic accusation of ‘Islamo-leftism’.

So, what is ‘Islamo-leftism’? Pierre-André Taguieff coined this very problematic term in his 2002 book The New Judeophobia. Taguieff used it to describe a conspiracy between conservative Muslims and the left to ‘bring down’ France. Taguieff believes in the racist colonial ideology of French exceptionalism and in the need for France’s ‘civilizing mission’. Therefore, he considers the Left’s anti-war rhetoric and rejection of imperialism to be in opposition to France’s historical mission. While there are many leftists who are against French colonialism, the proponents of Islamo-leftism use it to indict what they see as an alliance of Islamists and leftists against Western values. It becomes a conspiracy theory when it alleges that a coalition between left-wing academics and Islamists has taken hold in Macron’s government. Believers in this conspiracy theory want the government to crack down on the supposed movement in French universities. While supporters used to belong to the far Right in France, mainstream society has become involved in this debate over the feared spread of ‘Islamo-leftism’ in France.

The far-right leader Marine Le Pen used the accusation of ‘Islamo-leftism’ against her leftist opponents to suggest that their ‘alliances’ with Muslims have weakened the French state. Recently, Macron has started to use the term in order to appeal to far-right voters. This move has made what used to be a fringe talking point, heard only among members of the French far Rright, gain unprecedented visibility because the debate has reached the mainstream. The deliberate mainstreaming of this populist far-right notion has allowed French politicians to blame leftist forces in universities for the critical views many French students have of French society. The argument goes that the students’ outlook is due to their tertiary educators’ focus on racism, imperialism and structural discrimination.

In June 2020, Macron’s electoral strategy had him telling journalists: ‘The academic world has its share of blame. It has encouraged the ethnicization of the social question, thinking this was a good line of research. But the result can only be secessionism. This means splitting the Republic into two’. Following him, in October the minister for education, Jean-Michel Blanquer, criticised the ‘intellectual complicity in terrorism’ and warned that ‘Islamo-leftism’ was ‘wreaking havoc in society’.

On 14 February 2021, Frédérique Vidal declared on the right-wing channel CNews—the French equivalent of Fox News—that ‘Islamo-leftism is corrupting society in its entirety, and universities are not immune’. Vidal went on to say: ‘I am going to call for an investigation into all the currents of research on these subjects in the universities, so we can distinguish proper academic research from activism and opinion’. In the French parliament, Vidal said that the state would conduct an assessment of all the research that takes place in French universities.  Following the fury that Vidal’s suggested investigation created, Blanquer asserted that ‘there is something at work that is ideological and must be explicit in academia’.

Many people were offended by Vidal’s announcement and saw it as an attempt to kill academic autonomy. More than 22,000 people signed a petition calling for the minister’s resignation. France’s National Centre for Scientific Research (CNRS) has condemned the government’s move to investigate the research academics’ conduct. According to the CNRS, Islamo-leftism is a ‘political slogan’ that has no scientific basis. The CNRS considered the term ill-defined and accused the attempt to investigate universities as a move to stifle academic freedom. The CNRS insisted that it ‘particularly condemns the attempts to delegitimize various fields of research, like postcolonial studies, intersectional studies, or work on the term “race” or any other field of understanding’.

In light of what has been said, I would like to highlight the amalgamation and problems of the term ‘Islamo-leftism’, which conflates the religion of Islam with the Islamist political movement. This slipperiness is dangerous and misleading. As a Muslim feminist (and there are millions like me), I can be put under the Islamo-gauchisme umbrella—even though I am a fierce opponent of Ennahdha, the religious party in my country, Tunisia, and even though I loathe its leader, Rached Ghanoushi, who has destroyed my country and whose party tried to make Tunisian women lose their rights—simply because I teach courses and write articles that criticise racism, colonial patriarchy and anti-immigrant sentiment.

I would like to end this piece by saying that the authoritarian policing of thought advocated by the Macron government represents the real source of discord. The attempt to criminalise the research of those who introduce students to the atrocities of xenophobia and colonialism, and the new reality of an academic thought police that will allow research approving the government agenda only, will bring about the main sources of national division.

If antiracism can be switched on and off as a principle—repeatedly asserted in print, but abruptly suspended when the question of Palestine is raised—then its expressions are degraded into mere performances.