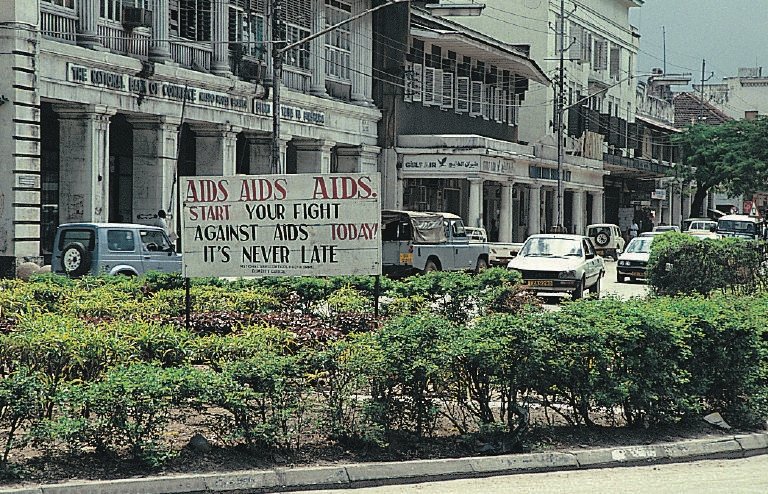 The AIDS crisis in Africa exceeds in horror and evil anything that the neoliberal world order has been able to dish up in the last decades. A disease that starts with young adults and works its way down through children and the newborn, leaving only the elderly, is not merely a disaster, but a catastrophe, a plague in the ancient sense of the word.

The horror is occasioned not by the disease itself of course, but by the decision of the Western pharmaceutical companies — Big Pharma — to resist any attempt by governments of the South to obtain cheap generic versions of the branded medicines which are effective in slowing or preventing the development of full-blown AIDS in those who are HIV-positive. Their use of international trade legislation to attack the South African government, which is attempting to buy generics from Brazil, has laid bare to many the ahuman character of the global neoliberal order. It was ever thus in everything from cash crops to infant formula of course, but the spectacle of snatching medicines from the mouths of the dying brings into clear focus the capacity of capital to turn something into its opposite, healing into killing.

The coincident publication of John Le Carré’s The Constant Gardener, in which he turns his attention from the cynicism and amorality of Cold War politics to the cynicism and amorality of one-world economics, only served to intensify the scrutiny of Big Pharma in the West. Faced with a public relations disaster, the explicit opposition of a number of Western governments, and the lack of enthusiasm of the Bush administration — the Clinton/Gore team had been happy to bully South Africa on their behalf — they would appear to be backing away from blanket prosecution of their global intellectual property ‘rights’.

Big Pharma argues that the prices they charge for their branded medicines — which push the price of drug-based AIDS treatments towards $20,000 a year per patient — are a measure of the extremely high costs of developing a new drug. Five-hundred-million dollars is the figure usually quoted but it is a fiction. The bulk of the costs are those created by the demands of intellectual property laws. Thousands of virtually identical compounds are tested because each can be copyrighted and used as a spoiler should a similar compound developed by a rival prove valuable. Similar treatments are created and then pseudo-differentiated for the same broad condition. An army of sales reps tours the GPs and specialists. When you add in the lavish conferences, the political lobbying and the lawyers to protect patent applications, $500 million is easy to rack up. Little wonder the ferocity with which markets are protected and forms of distribution which would undermine markets are crushed.

In light of this it has been suggested that Big Pharma should be asked to voluntarily suspend some of its patents in areas worst affected by the AIDS crisis. And so it should, but more important in the long run is to challenge the entire apparatus which maintains the notion of ‘intellectual property’.

The patent system which undergirds not only Big Pharma, but the whole biotechnology push was never developed with a view to being attached to the life sciences — to life itself. Originally established to facilitate the development of mechanical invention, this nineteenth-century knowledge industry was restricted to the visible and ‘invented’, and the notion that one could lay claim to the naturally occurring and ‘discovered’ was not entertained — otherwise the Curie family might have a claim to radium. The expansion of intellectual property to genes and chemical compounds occurred after the fact — when molecular biology had begun to develop the capacity for manipulating and transforming the material it studied. The establishment of this principle at the global level via the free-trade apparatus marks the single greatest transfer of common possession to private property in the history of the world. It’s the knowledge industry’s equivalent of the enclosures.

Yet though it is vaster in scale, its authority has come under assault in a more concerted and immediate fashion. The global and universal setting in which neoliberalism occurs makes a global and universal response more possible, and it is this enhanced capacity that has caught the corporate world by surprise. The biotechnology industry takes that process to the extreme. It is the primary agent of the ‘postmodern’ economy, in which nature itself is entirely dismembered for commodification and circulation.

Minor fiddling with the institution of patents only serves to legitimise it. The entire notion of ‘intellectual property’ as the given character of knowledge needs to be repudiated. Of course there is a need for a combination of licenses, royalties and public funding to maintain incentive and investment in knowledge development. But more importantly, nature and knowledge must be affirmed as a common and collective possession and practice. There is no need to look into the future to see what happens when this is not the case. It has already begun in Africa where one by one the hospitals are becoming hospices.