A Virus Is Colonising Our Public Life 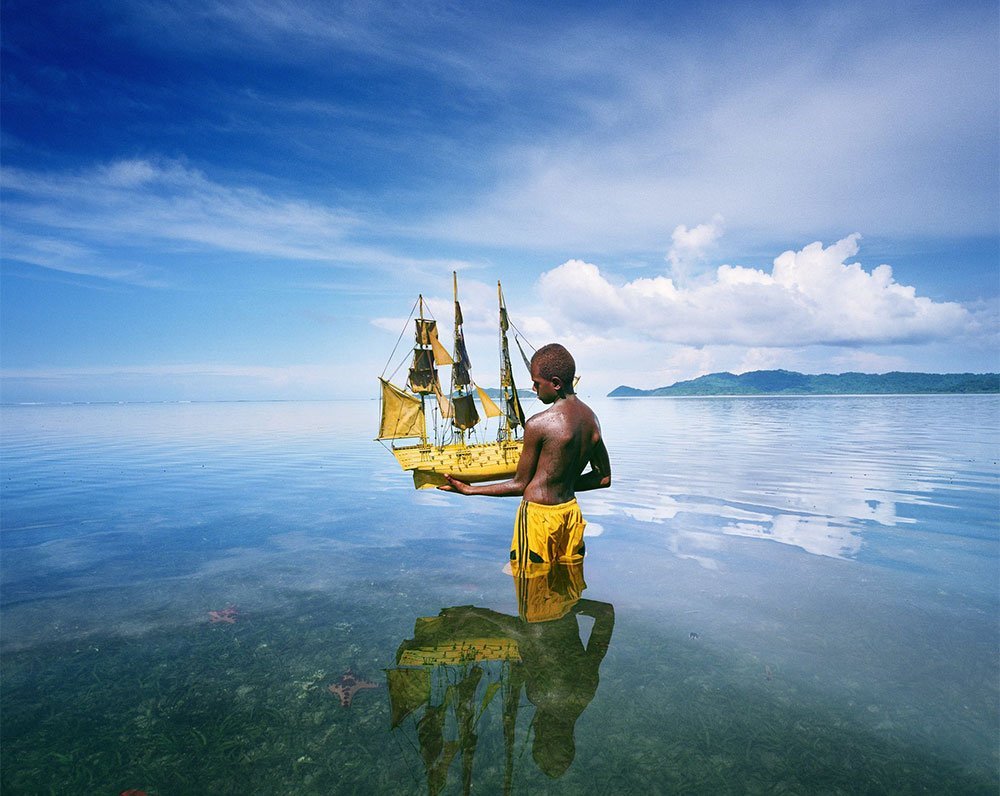 Viruses, bacteria and colonialism are related—this is an uncontroversial observation. Intense scholarly debate has focused on whether colonisers deliberately propagated infections (at times they did) or whether they merely took advantage of devastating epidemics (they invariably did). The history of Europe’s colonial expansion, however, cannot be explained without reference to the destruction that endogenous pathogens wreaked on Indigenous societies. Likewise, colonised societies, impoverished by colonialism, were exposed to devastating epidemics.

The relationship linking pathogens and colonialism has also entered Australian public discourse. In May 2020, for example, Victoria’s deputy chief medical officer, Annaliese van Diemen, associated in a tweet Captain James Cook’s arrival into Australia with the ongoing coronavirus pandemic. An ‘invader from another land’ decimated ‘populations’ and created ‘terror’, forcing ‘the population to make enormous sacrifices & completely change how they live in order to survive’, she noted, before concluding: ‘COVID19 or Cook 1770?’ Predictably, her comments elicited anxious responses in conservative quarters.

But the connection linking colonialism and pathogens is metaphorical as well as literal; we can make sense of one by referring to the others. Bacteria and viruses are exogenous entities that sometimes dominate the environments they invade, and if colonialism is defined as an unequal relation premised on domination and displacement, then the analogy acquires significant heuristic power. Viruses need cells to replicate, while bacteria need space to expand into (even though they often coexist and interact in complex ways), and this distinction is homologous to the dissimilarity separating colonialism and settler colonialism as different modes of domination. Colonisers need primarily the labour of colonised and enslaved individuals and communities, while settlers need primarily the land of Indigenous peoples. On the basis of this homology the colonial condition itself can be seen as an ailment. Frantz Fanon compellingly demonstrated that it should be seen as such.

Metaphors are important, especially when making sense of an unprecedented crisis, and we are now facing a crisis that is unprecedented indeed. Metaphors shape the way we collectively make sense of the world through language and it is significant that even before the current COVID-19 pandemic we were already ‘living by’ metaphors pivoting around images related to viral phenomena. We wish our posts could go viral (do spread this article if you like it), we fear our computers could become infected with viruses, we are afraid that an ominous metaphorical contagion could undermine capitalisation in the stock market, and we are locking down entire societies because of an actual viral epidemic.

But viral metaphors shape reality as well as our understanding of it; they shape our collective responses. In other words, we are simultaneously deploying and developing a viral imagination as well as facing an unprecedented viral pandemic, and as we face a viral condition that exceeds the pandemic, our life and society are being colonised by a virus. (‘Condition’ is a powerfully flexible term that can indicate a predicament or a set of circumstances, but it can also be understood as synonymous with illness, and it is significant that ailments are routinely understood through metaphors). To cut a long story short, the virus SARS-CoV-2 has rapidly ushered in a new political regime. It has colonised our public life.

It has done so in several interrelated ways, but three aspects can be emphasised. First, fundamental public-policy choices were made without discussion—our political life and fundamental freedoms were suspended. (This is a statement of fact that does not contradict the notion that these choices were necessary in terms of public health; Giorgio Agamben’s recently expressed concerns about the ‘exceptional’ expansion of governmental powers and the deleterious effect that panic and public-safety measures are likely to have on our social lives are justifiable whether the pandemic is a ‘fake’, as he maintained, or if it isn’t—a point his detractors have failed to engage with.) To use a language colonised peoples would immediately recognise, the virus radically undermined our collective sovereignty by imposing its own and enlisting governments in service of what could be described as a regime of colonial indirect rule. How uncanny that this virus should be a coronavirus, as Joseph Owen insightfully remarked; after all, ‘corona’ comes from Latin and it means ‘crown’, the metonymical marker of sovereignty.

Secondly, the coronavirus has confined everyone in strictly delimited spatially defined ‘reservations’. As it potentially occupies all public spaces, the virus has treated our ‘countries’ the way a colonising power would enforce terra nullius: the idea that collectively inhabited space is ready for dispossession and appropriation. The virus has occupied the space between us; in a sense we are now living under a spatial regime of colonial occupation characterised by extreme segmentation. Fanon aptly described the marked compartmentalisation of space that is typical of colonial cities, and while current confinement protocols replicate the spatial organisation that French colonial traditions codified in cantonnement regulations targeting subjected populations by immobilising them, as historian Léopold Lambert recently noted, they also replicate in detail colonial-era legislation designed to manage the Algerian anticolonial insurgency.

Thirdly, the virus has also resulted in another type of colonialism: it has produced an apparently irreversible acceleration in what a growing literature on surveillance capitalism defines as data colonialism. Our data is been appropriated as if it were data nullius, and it is being more intensively extracted from us precisely when we are compelled to shift our social life online and to rely more and more on digital services. It is data labour we cannot withhold; we are being dispossessed of data that is ours and we have little way of protecting our digital territories.

But if we are dealing with a colonial ‘condition’, we are obliged to think about our body politic’s ‘immune system’ and how to develop ‘antibodies’. We need to pursue this analogy, and as an actual vaccine against an actual virus is developed we must also assemble a metaphorical vaccine against a metaphorical virus. Engineering the latter will rely on a long tradition of anticolonial thinking; we are not starting from scratch, just as the virologists who are rushing to develop a vaccine against COVID-19 are not starting from scratch. One thing we know about the colonial ‘virus’ is that it constantly mutates. A decolonial ‘vaccine’ will have to be constantly updated.

And it is not only about the appropriate (metaphorical) vaccine and related updates. Good medical practitioners always inquire into the general physical condition of their patients. Income inequality, unsustainable global trade and indebtedness, austerity policies, and the invasion and destruction of the environment have severely undermined our political life’s immunity. After decades of excess and neglect our polities are ill-equipped to face viral infections both literal and metaphorical. Now it could go either way: we may aim to restore ‘normal’ conditions, even if it was a sickening ‘normal’ to begin with, and we could bring back the appearance of normality—a V-shaped recovery. But our collective metaphorical ‘immune system’ will remain weak. Returning to an unsustainable normality will be like pumping steroids to get fit without addressing underlying conditions and debilitating lifestyle choices. The general ‘health’ of our political life will not improve—there would be an L-shaped deterioration and little prospect of an eventual U-shaped outcome. We would be waiting for an inevitable second wave of ‘infection’. Alternatively, we could also emerge away from a relation of colonial subjection with genuine anticolonial prophylactics. Pandemics in history often promoted the reconstitution of society, and many are already taking advantage of this one. Our collective life may become more socially cohesive, our societies characterised by less income inequality. As many global stars and artists have advocated in an appeal recently published in Le Monde, and as many scientists and scholars have also recommended, we may not want to go back to the statu quo ante. If we go in a different way our healthcare systems may be better funded and more resilient, our relationship with the environment more sustainable, our consumption patterns less wasteful or compulsive, our reliance on exploitative global trade and financial arrangements less rapacious. Our industrial manufacturing of meat may be less cruel and reckless (if we are uninterested in respecting animals because it is morally imperative, we may be tempted to respect them because not doing so, as a growing body of scientific research demonstrates, is the reason that zoonotic viruses are now more than ever mutating and ‘jumping’ species to affect humans). Our relationship with the Indigenous lands and sovereignties on which we live and which we dismiss may finally become respectful and substantively acknowledged, an actual and not a metaphorical decolonial passage. We may end inoculating our public policy against the possibility of future mutations of the colonial ‘virus’. A viral crisis will have generated the growth of strong antibodies and an immune response. This is what effective vaccines do.

This essay is the fruit of an on-going collaboration, stemming from a live interview between the authors, and follow-up conversations. The present essay reflects our shared ideas but was mainly penned by Lorenzo. A rather different elaboration of our ideas appears in ‘COVID-19 and Its Metaphors’, in which the authorship is reversed.

Lorenzo Veracini is Associate Professor of History at Swinburne University of Technology, Melbourne. His [research] (https://swinburne.academia.edu/LorenzoVeracini) focuses on the comparative history of colonial systems and settler colonialism as a mode of domination. He has authored Israel and Settler Society (2006), Settler Colonialism: A Theoretical Overview (2010) and The Settler Colonial Present (2015). He co-edited The Routledge Handbook of the History of Settler Colonialism (2016), manages the settler-colonial studies [blog] (https://settlercolonialstudies.blog/), and is founding editor of Settler Colonial Studies. His next book, The World Turned Inside Out: Global History of a Political Idea, is forthcoming with Verso.

Professor Desmond Manderson is jointly appointed in the ANU College of Law, and the College of Arts and Social Sciences at the Australian National University, where he directs the Centre for Law, Arts and the Humanities. His most recent books include Law and the Visual: Representations, Technologies and Critique (Toronto 2018) and Danse Macabre: Temporalities of Law in the Visual Arts (Cambridge, 2019). He is a fellow of the Royal Society of Canada, the Australian Academy of Law, and the Academy of Social Sciences, Australia.