A Tale of Two Outbreaks 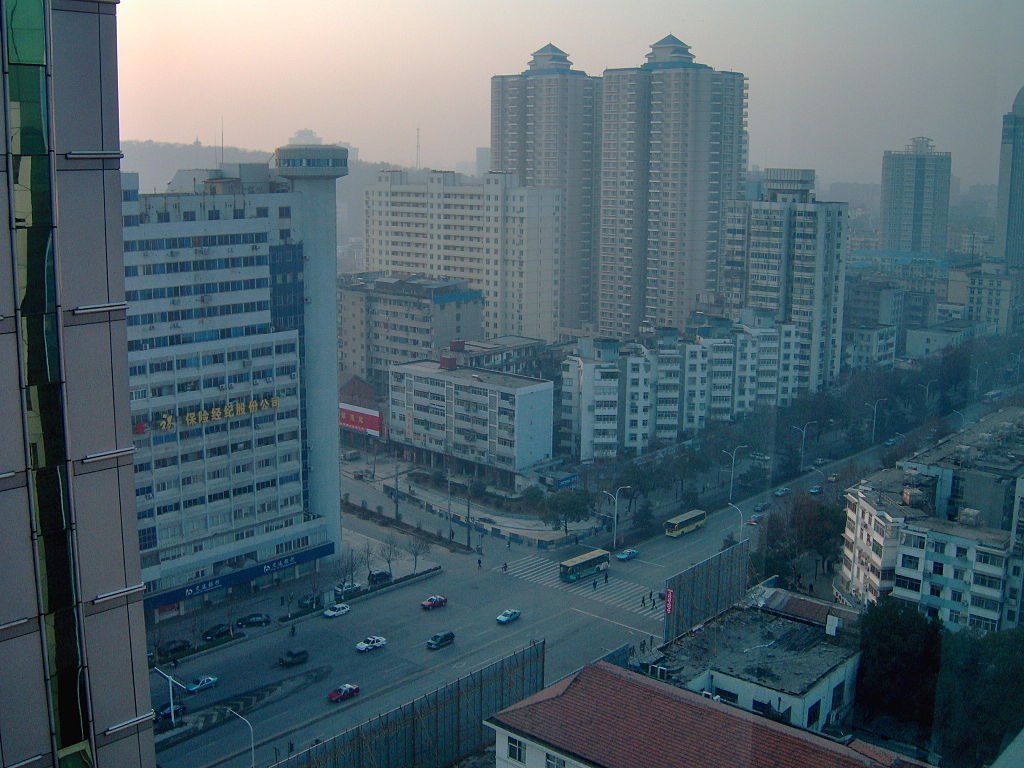 It was late January and I was in Kashgar, the far-western region of China, when face masks seemed to multiply by the day. In the previous weeks, news of the Wuhan outbreak of a SARS-like novel coronavirus had been increasingly filtering through the Communist Party of China’s vast internet firewall. As far as I can tell, the centralised response of the national government began on the morning of 23 January. We had left Kashgar early in the morning in a failed attempt to visit Yarkand, about two hours to the west by train. The New York Times had published a piece a few days earlier that portrayed the ancient city as a model of Beijing’s crackdown on the Muslim Uighur ethnic group. We were refused entry into the city upon arrival. Put on the next train back to Kashgar by the ‘immigration police’, we felt dejected and hungry; we had skipped breakfast. Still coming to terms with the surreal experience of being refused entry into the city, we had no idea that when we stumbled off the train at Kashgar’s station, just hours later, we were stepping into a strange new chapter of our lives.

At Kashgar, all passengers were told by police to line up; our temperatures were checked by infrared guns. The young men and women checking us wore white medical gowns, masks and gloves. The state media had just confirmed the first two cases of COVID-19 in Xinjiang province. We would later learn that it had been announced at 2am that all outbound transport from Wuhan would stop at 10am, and that afternoon all outbound highways from Wuhan were blocked. The next day would mark the official beginning of the Spring Festival public holiday, its associated travel season estimated to be the largest yearly human migration on earth. In the days prior, an untold number of people (perhaps millions) had already begun their mass movement across China and the world.

On the next day, 24 January, the twelve cities surrounding Wuhan would also close, placing 50 million people under lockdown. If the authorities had acted even one day later, an unconstrained Chinese New Year holiday would certainly have resulted in an unthinkably more rapid and deadly spread than the crisis that did unfold. That afternoon we left Kashgar, temperature checks now a standard part of the airport-style security at the train station. We had with us only a few thin blue masks that we had found at a bazaar; we could not find hand sanitiser anywhere. The next morning we arrived in Turpan before dawn; we had to knock on the door to wake the elderly security guard at our hotel. He checked our temperature. In Turpan it quickly became clear that the lockdown was in full effect, though nobody could tell us this in so many words. Everything we tried to visit was closed. The city seemed to be significantly thinned out, too, with many restaurants and shops closed, and those that were open checking temperatures upon entrance. The only place that seemed to be doing good business was the pharmacy near our hotel, which was selling 3M masks, but there was still no hand sanitiser to be found there or in grocery stores.

After two uneventful nights we left Turpan, headed for Lanzhou, where we had planned to stay for another two nights. That day it was announced that the Spring Festival holiday would be extended by a week to help control the spread of the virus. Along the twelve-hour train route I called ahead to our hostel, to find that it had closed. The owner strongly advised against visiting the city, as museums and shops had been closed; he warned that the city might soon face a Wuhan-style lockdown. Most people on the trains now wore masks. When we arrived in Lanzhou the next day, the temperature checkers wore disposable full-body protective suits with plastic splash shields covering their faces. We searched for hand sanitiser (still none to be found) and changed our tickets to the next available train onward to Guangzhou. Across the country, ticket-change fees had been waived due to the virus. A cleaner at the train station was pouring disinfectant on the floor outside the public toilet.

The final leg of our journey—Lanzhou to Guangzhou—was the longest: thirty hours on the slow train. In the dining car we saw train staff line up to have their temperatures taken. Two of them seemed to have high readings and sat to the side red-faced and embarrassed, waiting to be rechecked. On the train, even with an unreliable mobile connection and an even more unreliable VPN tunnel to access unrestricted web, we saw videos purportedly from inside virus ground zero. Bodies lined the waiting rooms and hallways of hospitals. One particularly disturbing clip showed a young nurse breaking down and screaming, ‘We’re all going to die here!’ In the morning, our train went directly through Wuhan without stopping. By this time, nearly sixty million people were affected by the lockdowns. When we arrived in Guangzhou on the evening of 28 January, it was a stark contrast to where we had started our journey. This was not only because it was about 20 degrees warmer but because by this time face masks were mandatory in Guangdong province. The streets in the centre of the old city were remarkably empty. Our hostel had a big bottle of hand sanitiser, the first we had seen on the trip.

In the next few days my return flights to Sydney would be cancelled. I found new tickets to fly out on 3 February, connecting through Hong Kong and Taiwan. When I arrived at Sydney Airport on 4 February, the automated SmartGates were closed and I overheard a customs officer say that they needed to ask everyone if they had been to mainland China in the last two weeks. Most of the passengers in line wore masks, and the passport controllers did too, but some of them had them pulled down to uncover their mouths. When I came to the front, I was directed to pull down my face mask for the passport check. Though my arrival card was marked CHINA as the ‘country where you spent the most time abroad’, I was waved through with no questions asked and I was not asked to self-isolate. Outside of the airport, I didn’t see anyone wearing a mask.

Australia reported its first case of coronavirus on 25 January, a day after lockdown measures in China were put in place. Life in Melbourne carried on as usual. It would take another two months before serious provisions were implemented nationwide to ‘flatten the curve’. The two-week incubation period of this virus has proven to be something of a silent, slow-motion time bomb. Over the ensuing months, the eye of the viral storm would shift from Asia to Europe, and then to the United States, causing devastation everywhere in its path. Healthcare systems on the brink of collapse, mass grave-digging exercises, and ice-skating rinks turned into temporary morgues have been but some of the macabre realities of COVID-19.

In Australia, the slow-paced, deliberative nature of our democratic system has been no match for the rapid and invisible spread of the virus. The number of cases grew exponentially, accelerated significantly by the now infamous Ruby Princess disembarkation, which saw 2600 passengers leave the cruise ship at Sydney’s Circular Quay.

The Ruby Princess in Australia reflects, albeit on a microcosmic scale, the initial spread of the virus in China. Holidaymakers disembarked at Circular Quay without any idea of the impact they would soon have on transmitting the virus throughout Australia, just as months earlier the Chinese public unknowingly spread the virus prior to the Spring Festival celebration.

The lack of transparency surrounding the circumstances that allowed the cruise ship to dock and allow passengers to alight in Circular Quay has sparked public outrage as well as a formal police investigation. I personally find it hard to come to terms with the irony of the situation. For a government that ran entire election campaigns on the rhetoric of stopping boats, it has failed dismally with this one. It is somewhat fitting that a cruise ship—to me, a symbol of self-indulgent capitalist fetishism—has significantly escalated the spread of the novel coronavirus in Australia.

There has been something unnerving about Australian behaviour throughout the pandemic. The first tangible marker that something had changed was empty supermarket shelves across the country. Whether this was the result of supply-chain breakdowns, panic buying or a mixture of the two is still unclear. I have read plenty of stories about hoarders trying to return goods once they realised that the apocalypse was not nigh.

The prime minister’s response to hoarding was to employ a discourse of identity, blasting the behaviour as ‘un-Australian’. This simple, sweeping message seemed to work. But it has left a sour taste in my mouth. What does it mean when our current government’s tactic for compliance is manipulating a discourse of difference, employing the rhetoric of the ‘other’ that had so long been reserved for migrants and the various political-scapegoat minorities du jour?

Suddenly, the JobSeeker payment, which has been stagnant since 1996, is not enough for an Australian to live on. The effective doubling of the payment has been budgeted to last for six months. There is an assumption here that the stoic Aussie battler will efficiently resume their place within the economic machine, whereas that mythical urban villain the ‘dole bludger’ will silently return to his or her meagre pre-pandemic existence.

The NSW government has had to bring in a $5000 penalty to protect frontline medical staff who are being spat on, verbally abused and generally harassed by members of the public.

Who is given a fair go in lockdown?

What will be left to shake out of the proverbial sauce bottle for people without permanent protection or stable housing, or for those who fall into the category of ‘un-Australian’?

As we prepare to resume our lives with some degree of normality, let’s not forget the strange times through which we’ve just passed.

Leanne Wang is an Editorial Assistant and Social Media Manager at Arena Publications. She is currently working on a forthcoming arts and culture magazine.

Pailey Wang is a student of Politics at Sciences Po and the University of Sydney, where he has edited and contributed to student publications.

Well said. Great articles. I found they are very informative and truely worth reading…